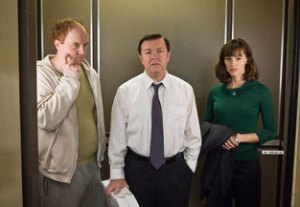 I’ve been waiting for this trailer and it doesn’t disappoint. The Invention of Lying (formerly known as This Side of the Truth) has such an amazing cast, I don’t know how it can not be funny. No one can take a to-his-face insult like Ricky Gervais.

Besides the people seen in the trailer—Gervais, Jennifer Garner, Rob Lowe, Tina Fey, Christopher Guest, et al.—Jeffrey Tambor, Patrick Stewart and Jason Bateman are also in this movie. If that’s not enough, Gervais says on his blog there are “great cameo surprises.”

Co-written and co-directed by Gervais with Matthew Robinson, Lying opens September 25, 2009 in the U.S. and October 2 in the U.K.

This entry was posted in Movies and tagged Entertainment, invention of lying trailer, jennifer garner, jonah hill, Movies, ricky gervais, rob lowe, this side of the truth, tina fey. Bookmark the permalink.

7 responses to “Trailer: Ricky Gervais’s THE INVENTION OF LYING”