Winners of THE FIRST RULE Giveaway 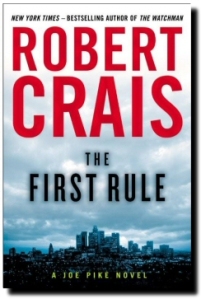 After I plugged everyone’s names into Random.org, giving extra entries to those who qualified, the website drew Sophie Littlefield as my first winner. Sophie, you get an ARC of Robert Crais‘s The First Rule (pub date 1/12/10), which will be sent to you directly from Putnam. Please e-mail me your address. My friend Lydia there said she’ll also throw in some temporary red arrow tattoos so you can be like Joe Pike!

Random.org selected a second name for the autographed set of photo cards and that winner is le0pard13. I’ll ship you these with some red tats as well. Both you and Sophie will have to send me pictures after you try them on! (Mine’s below.)

Many, many thanks to all those who entered and shared your tales of heroism. It was inspiring to hear about all those good deeds, especially during this season. I always knew there are superheroes among us.

Last week, author Robert Crais unveiled excerpts from his hotly anticipated novel, The First Rule, at the Mysterious Galaxy bookstore in San Diego, California. The pub date is vaguely scheduled for January or February 2010. (UPDATE: At Crais’s site, it now says January 12, 2010.) But wait! Stop banging your head against your desk, please! Crais let me tape his reading to share with those who couldn’t attend.

Since this is a Joe Pike novel, I’ll be Pike-like and keep the setup brief. Somebody murdered a friend and former colleague of Pike’s. HUGE mistake. With Elvis Cole’s help, Pike goes hunting, ready to unleash some serious hurt on the perpetrators. Yay!

Crais read three different passages, one in each video. Afterwards, check out the teaser Q & A I did with him about The First Rule. (UPDATE: Win an ARC and read my longer interview here.)

Watch, read, then let me know your thoughts!

Robert Crais: The meaning is in the eye of the beholder, so take your pick: The East European organized crime gang sets operate under eighteen written rules called the Vorovskoy Zakon—which means the thieves’ code—the first rule of which says they’re not supposed to have a family. But the title, The First Rule, might also be interpreted from Joe Pike’s point of view, which suggests his first rule is that you take care of the people you love, and everything that implies. And if that’s the case, then the first rule for the rest of us is pretty simple: Don’t piss off Joe Pike.

PCN: In the excerpt, you mentioned how Pike’s walls are empty. Why isn’t Elvis on there?

RC: Elvis is in Joe’s heart.

PCN: What’s on your walls?

RC: I have more people in my life than Joe has. My walls are filled with pictures of my family, my friends, cool things that have happened along the way. Art. A couple of human heads. The usual.

PCN: You seem to take pop culture cues for your author photos. For The Two Minute Rule, it was the Brokeback look, and you’ve got an Agent Smith, Matrix thing going on with the last two books. What do you have in mind for the next one? Lederhosen a la Brüno?

RC: I was going for the lederhosen look until Brüno swiped it. Fashion is such a bitch, I’ve decided to pass on clothes. We’re going with a nude shot. 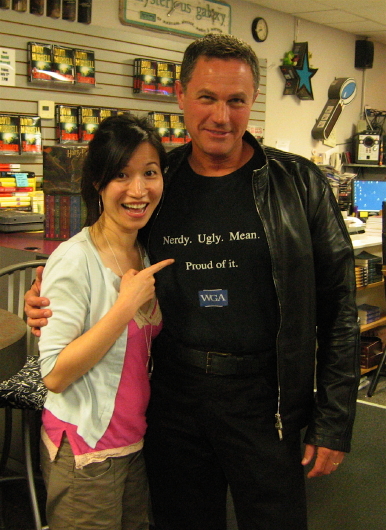 Look who's nerdy--me & Crais, WITH clothes