The following is by new contributing writer, Sarah Carbiener. She obsesses about TV as much as I do and will start providing regular coverage of it. I’m happy to have her extra pair of eyes since there are so many shows and I can’t watch them all.—PCN 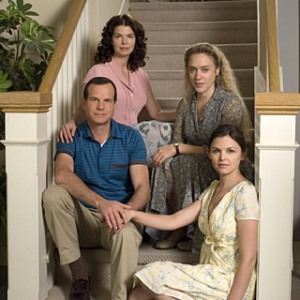 During the first season of Big Love, I couldn’t help but be fascinated by the polygamous family, their world, the politics, and…be completely bored by the plots. It felt like the creators were too protective of their main characters, not wanting to put them in any real trouble and, gosh darn it, they really wanted us to love and root for the central family. Well, it was pretty hard to do that when they were in so little trouble for so long. This certainly wasn’t a problem in the third season, however, and it seems it won’t be in the fourth either. **Spoilers ahead!**

In the third season finale, Nicki (Chloe Sevigny) brings to the Henrickson household the daughter she abandoned when she left her first husband J.J.; Bill’s brother Joey (Shawn Doyle) kills Roman (Harry Dean Stanton), the prophet of Juniper Creek, to avenge the murder of his second wife-to-be; and after falling feet first through a barn loft and hitting his head, Bill (Bill Paxton) decides to follow Roman’s example and start his own church. (This is only a fifth of what happens in the finale. Like every episode last season, it was packed with plot developments.)

The fourth season picks up six weeks later with the FBI mysteriously still searching for the long-dead Roman. It isn’t until Nicki’s mother’s large walk-in freezer loses power that we discover where Roman’s been hiding.

Panicked, Adaleen (Mary Kay Place) calls Nicki, and because she is one of my favorite characters to hate, it was awesome to finally get to see her come apart at the seams. This is the woman who hired a man to approach her son Alby (Matt Ross) for sex in a truck stop and then murder him, and when he confronted her about it, she not only didn’t deny her actions, but she wasn’t at all remorseful. It doesn’t get much colder than that.

But in this opening episode, when she’s begging her daughter to go into the walk-in freezer and get some bacon because she doesn’t know how else to tell Nicki that her father’s dead, we finally get to see her as desperate and frantic and crazed as she makes everyone else.

After the discovery of the body, the episode becomes a much darker version of Weekend at Bernie’s as the Juniper Creek gang and the Henricksons keep trying to dump the body in the others’ backyard. Unfortunately for Bill, he forgot the one rule about revenge. (My father taught me this in the second grade, and it has served me well ever since.)

If someone picks on you, never get them back right away because you will always be the person who gets caught. Wait a few days and get them when they’re not expecting it. Bill drags Roman’s thawing corpse straight back to Juniper Creek when it shows up in the lot where he’s building the casino and, based on the end of this first episode, it looks like he’s getting caught.**End spoilers**

The rest of the episode includes some light conflict between Barb (Jeanne Tripplehorn) and the Native Americans they’re running the casino with, and a hilarious storyline between Bill’s homicidal parents (Bruce Dern, Grace Zabriskie). The septuagenarians’ fighting, complete with exclamations like, “Ow, my hip,” had me laughing so hard I was crying. Overall, a very strong start for what’s sure to be another intense season of our favorite polygamists. With Bill basically naming himself the next prophet, this may be the most literally epic season yet.