This is the conclusion of an interview with Steve Amick (click here for part one), who wrote the 1940s love story, Nothing But a Smile.

PCN: If a movie of your book had been made in the ’40s, who would have played Wink, Sal and Reenie?

PCN: According to IMDb, he had no movies released between 1941 and 1946 so I’d say the break was about five years. 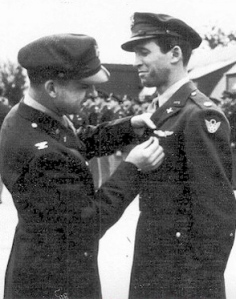 SA: He was very quietly piloting a bomber over Europe. And when he returned, he didn’t want the studios making something out of it, so it really was played down…Another guy that comes to mind is William Holden. A relative unknown at the time, he made training films for the Air Force for much of the war years, but he would have been great, too.

Sal might be Jane Wyman, if Ronald Reagan would have allowed her to do topless. Virginia Mayo would be good. Again, I believe, Ronald Reagan might have had a say. Other possibles: Lana Turner, Betty Grable, Olivia De Havilland, Rita Hayworth, as long as she didn’t bring her meddling husband, Orson Welles, in tow. Or possibly Lauren Bacall, for some of the tougher side and because she might have brought Bogie in tow. Reenie could be part Jane Russell—not the obvious parts—and part Jennifer Jones. 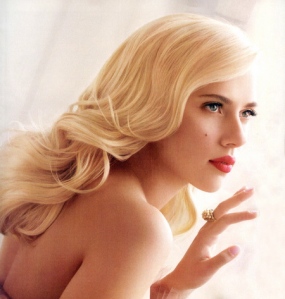 SA: These days I could see Scarlett Johansson or Ginnifer Goodwin, when she dyed her hair on Big Love, as Sal. Anyone from the Anne Hathaway School for Young Brunettes with Talent would be great as Reenie and maybe Lee Pace from the short-lived Pushing Daisies as Wink. He’s tall and a little Sad Sack and droopy-eyed and can do shy well.

SA: I haven’t, but if he’s reading this, I have. Many, many, times…My wife thinks Bobby Cannavale [could play] Keeney, and he’s great, but I kind of imagine the wounded vet as more like Vince Vaughn attempting to play it straight, hoping for more dramatic parts in the future. And with an arm missing—possibly by CGI, unless Vince Vaughn really, really wanted the part and wanted this to be his Raging Bull. Though I do think buzz about him having his arm removed just for the movie might be seen as a bummer and put a crimp in the movie sales.

PCN: But that would make him a shoo-in for an Oscar. The Academy loves it when actors go to extremes like that.

SA: True, so Vince Vaughn might want to play Sal. But actually, the first thing that really comes to mind when you start imagining casting a story like this isn’t something like “how nude would they get?” but more the issue of age. With a more contemporary, more realistic approach, the trick would be getting actors young enough—we forget how young these people really were during the war years. They were just kids, most of them, but they went through so much and so they came out of it knowing how to behave like grownups. You sort of forget that these characters were really in their early twenties.

Given the time it takes for a movie to get to the start of principal photography, perhaps the dream cast is a group of relative unknowns currently starring in some cable Disney show. Possibly I’ve never heard of them and they’re all playing vampires or dancing around a high school hallway this year.

PCN: Sal encountered judgment for what she did when she tried to buy a house in a family-oriented neighborhood. How would you feel if a Playmate moved next door to you?

SA: Depending on which neighbor would have to move out to accommodate her, I might feel a slight bit of brief sadness. But I would bring them cardboard boxes and I would help them pack up their stuff and order a pizza while we loaded up the moving van. I would get them a going-away card and maybe a bottle of wine or something. And I’d probably wash our windows and trim the hedges back, maybe install a plate glass window.

I’ve had two short stories in Playboy, so I wouldn’t be one to throw stones. Though I did remain clothed while I wrote them.

PCN: That’s good, as well as sanitary. So not only do you read Playboy for the articles, you write them.

SA: Wrote them—there’s a new regime there. And it was only short stories—I didn’t advise anyone on the latest stereo equipment or new ways to tie a cravat.

The cool thing was, one of my main mentors who encouraged me early on to write fiction was a locally-celebrated high school teacher who used to supplement the reading with short stories he’d Xeroxed out of back issues of Playboys, back when they published some of the greatest American writers out there. He pretty much flipped when he heard they took my first story and that I got the guided tour of the Chicago offices. I saw hand-corrected galleys by Vonnegut and Kerouac and one of the original prints of pre-blonde Marilyn sprawled on red velvet, back when she was an unknown girl next door, posing for pinups and trying to get by.

PCN: Wink only turned to photography when he realized he’d never be able to draw again. What would you do if you couldn’t write?

SA: If I could sing better, I’d do that. Every contemporary writer would. I’ve always dabbled to one degree or another with bands and songwriting. I’ve still got a fun little CD of original songs I recorded out there somewhere. 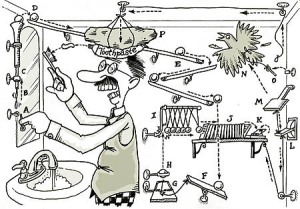 And I’ve always been involved in art. Like Wink, I wanted to be a cartoonist when I was quite young. Big fan of Rube Goldberg as an eight-year-old. I actually took a lot of painting and drawing classes and flirted with a second major and a graduate degree in art—graphic design…Maybe I’d get into fireworks or the long con, preferably one involving a lot of disguises. Con men have to know how to build a narrative. Of course, in either job I’d be dead inside a month.

I did seriously consider, when I turned forty, going to a hypnotherapist and getting hypnotized not to write every day. To abandon that routine, because I didn’t feel it was serving as a career. I’d only had short stories published, and some small plays produced. My wife, who’d only been married to me for two months at that point, told me to hold off on the hypnotherapy just a little longer—she’s a librarian and liked that she’d married a writer—and then a month or so later, I sold my first novel in a nice little bidding war and I was finally on my way.

SA: The chick incubator would have to go, as birds sort of skeeve me out. I grew up in a house with a lot of plate glass and surrounded by trees; you do the math. I would probably toss the mounds of earlier drafts of things that cascade and wobble high above the square foot of space on my desk that now accommodates my laptop.

I would get rid of the mice that have appeared; possibly the hidden mold that I may or may not be inhaling. I would keep the framed Clash poster, signed by the band backstage when I was a young punk. Ditto the old map of North American native tribes and my library poster of Kelly Ripa telling kids to read books.

I would also toss the several how-tos friends and relatives have given me on the topic of organizing and clutter control. I would keep the photo of my toddler taking a bath because it reminds me why I have to stay in the basement and cannot spread out the way I once did when this was my bachelor pad.

PCN: Is your next book really about Danish living room furniture? It sounds juicy.

SA: It is juicy. In fact, let me make a note to myself, in the next pass, to add more scenes in which characters imbibe juice because if nothing else, I want my characters to be well-hydrated…But seriously, it’s not about Danish Modern living room furniture so much as it would not exist in the same way without the presence of Danish Modern furniture. It is not a novel about Charles and Ray Eames, though that might be a good idea, too…let me make another note…It does not take place in an Ikea.

What else can I tell you? Here’s a fun fact: Unlike the stories for Playboy, you might call it “unsanitary” since I did write the majority of this other one in the bathtub.

PCN: That’s a good one. Next time I hog the bathroom, I’ll tell my spouse I’m writing a novel, too.

SA: I’m not kidding. And so we go full circle back to “nothing but a smile”? I do wonder if it brings something raw and exposed to the book, but it wasn’t really premeditated. I just wound up writing most of it in the bathtub, that’s all.

And I should also say that it won’t necessarily be my next novel, in terms of publication. I hope it is my next published novel. We’ll have to see just how brave or crazy the powers that be are upstairs at Random House.

If it isn’t next, I will sell this one door-to-door, I swear. It means something goofily serious to me, about nostalgia and a longing for a feeling of safety. I can’t say more because it is so damned high concept, but it will baffle and stun those who think I only write about pinup girls and pie.

PCN: You can ring my doorbell if you do end up selling it door-to-door. And if you bring pie on top of that, I’d say a sale is almost certain.

This entry was posted in Books, Q & A and tagged Books, interview, kelly ripa, lee pace, nothing but a smile, Q & A, scarlett johansson, steve amick. Bookmark the permalink.